The midway point of the year isn’t far off, and it’s safe to say that a lot has gone on in local SEO already this year.

But, in the past couple of months alone even more tests and updates have been impacting GMB.

In this GMB news roundup, we take a look at the biggest headlines affecting local SEOs recently.

Think we’ve left something out? Put it in the comments section down below!

It’s often recommended that businesses make use of GMB’s Messaging feature to better communicate with customers. But you might want to hold your horses.

LocalU shared that when searchers reached out via GMB Messaging, quotes from competitors were being shared.

So, if you’ve got messaging switched on in your profile, you could be unwittingly sharing competitor information with your potential customers…

As you can see from the screenshot above, Google now offers searchers the chance to send their same quote request to a business’s competitors directly after messaging. This could definitely deter merchants from turning the messaging feature on, as it could drive potential customers to look elsewhere.

Why is this important? Google could be helping to push your potential customers in the direction of other businesses with this feature. It’s not the first time we’ve seen Google try to provide more diverse results, but popular opinion seems to be that this feature could cause more harm than good.

Fake reviews have long been plaguing Google My Business listings, and at last, it seems Google is doing something to help local businesses proactively tackle the issue.

With this tool, businesses can flag reviews for removal and, importantly, track the progress of their reported reviews. 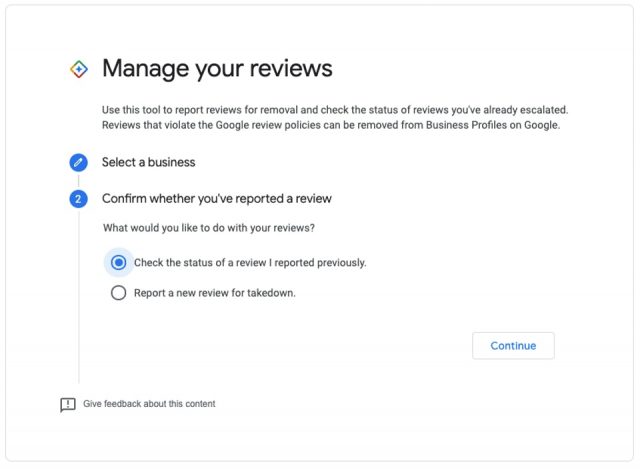 Why is this important? Agencies and local businesses have cited fake reviews as a real problem for some time. This new review removal tool from Google My Business can be seen as a big step in the right direction.

This year we’ve seen lots of improvements made to Google Maps, as Google and Apple continue to vie for the top navigational app.

At the end of March, more AI-powered features were introduced, including indoor live view and an updated directions interface.

Plus, new Google My Business attributes like curbside pickup and delivery were introduced to help restaurants and food stores meet the demands of consumers in a Covid-19 world.

Why is this important? For anyone with a Google My Business listing, it’s important to stay abreast of updates to Google Maps. GMB Attributes have become increasingly prominent due to Covid-19 and Google taking action to highlight women-led, black-owned, Asian-owned, and LGBTQ+ friendly businesses. Plus, indoor mode will help businesses located within malls or shopping centers get found more easily. In general, whenever there’s a new feature, it’s worth seeing if it applies to your business.

Arguably, this was the biggest Google local news of the year: who would have thought the iconic 3-Pack would change?

LocalU spotted mobile SERPs with no 3-Packs. We then did our own tests and lo and behold, 2-Packs were being found for multiple local searches performed on mobile. 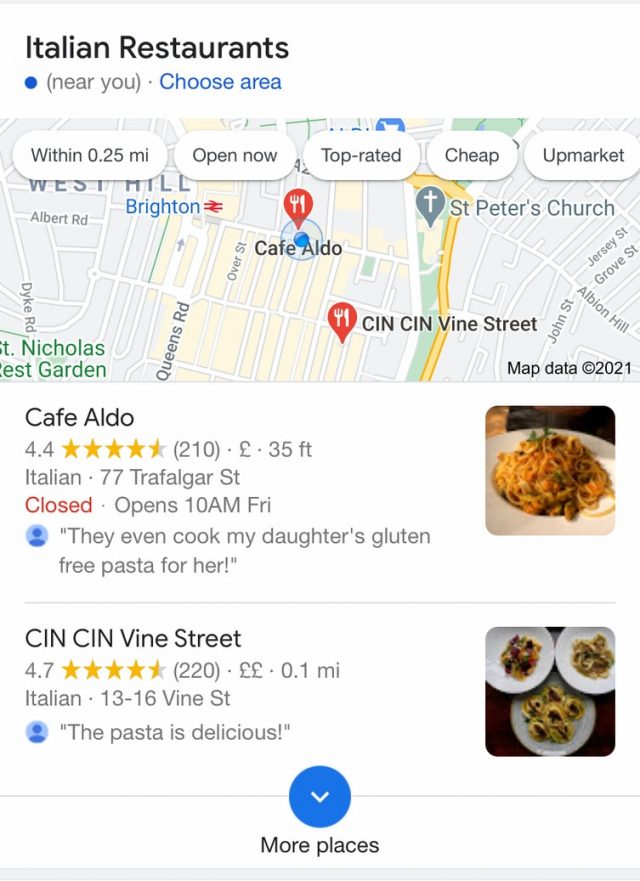 Since the initial news broke, there’s been little buzz, but we have noticed that 2-Packs are still present for some queries.

Why is this important? This news could mean that Google is creating more space for ads. But even if not, if there’s going to be even less real estate available in local SERPs then that’s important to know about. We recommend doing a local search for keywords relevant to your business and seeing if the 2-Pack is affecting your results.

GMB gets a new ‘new’ label for recent reviews

At the beginning of April, Google put even more importance on GMB reviews and their recency by introducing a ‘new’ label. This update means that searchers are alerted to new reviews, which are given more prominence. 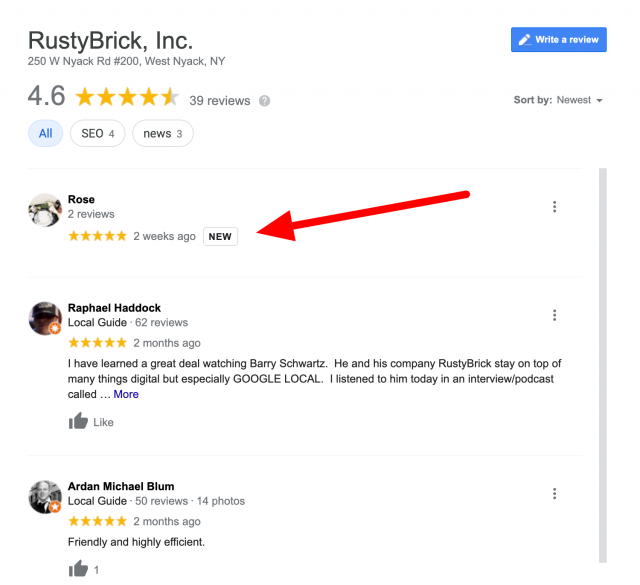 Why is this important? We’ve long known about the importance of recent reviews but this label shows Google placing more emphasis on review recency. To make sure you benefit from this feature, continue regularly asking for reviews and make sure you have reviews left within the past two weeks.

One to pay attention to for Google Posts fans; back in April, Google clarified that businesses should not include phone numbers in Post updates.

LocalU reported on this at the time, after noticing that GMB had clarified its Posts guidelines to account for “phone stuffing”.

Google states that it’s put this rule in place to avoid “risk of abuse”.

Why is this important? Also this year, we saw GMB begin showing old Google Posts (which initially would expire after 7 days). This means that you might have Posts you don’t remember or aren’t aware of showing on your listing. If these include your phone number, you could be penalized. If you think you might have included phone numbers in old Posts, set aside some time to check and edit if necessary!

In April we saw many Google reviews go missing. This isn’t the first time something like this has happened, but there didn’t seem to be a clear reason or resolution to the issue.

According to Google My Business, the review filter is working as intended.

Are you seeing an uptick in reviews not being published?

LocalU faculty member, @keyserholiday figured out a way to work around this filtering issue, which @GoogleMyBiz describes as “working as intended”

If you’ve experienced this issue, you can join in the conversation at Local Search Forum.

Businesses that have used Posts recently get rewarded

Always keeping her eye on the ball, Joy Hawkins spotted a Google Maps test whereby businesses that had recently shared a Google Post were being highlighted.

Why is this important? That little red dot could help your business get seen and stand out in SERPs. This update definitely gives more prominence to businesses that use Google Posts, so it could be worth giving them a go if you haven’t already.

A recent update to GMB Insights sees data about bookings become available. Colan Nielsen first spotted this and shared his findings on Twitter:

Look like the “Bookings” tab is starting to show up in the new GMB Insights section. pic.twitter.com/wEbj4rDIvS

According to another user, the bookings info is showing up for hotels as well (an industry that often goes at a very different pace to others).

Interestingly, in the BrightLocal Google My Business Insights dashboard, it’s also showing the option to see ‘bookings’, even though we don’t have the option to ‘Book an Appointment‘ enabled right now.

This is a relatively new development so we’ll keep tabs on this story and update you as needed.

In an effort to become even more of a one-stop-shop for SMBs, Wix announced its latest integration with Google. The new GMB/Wix partnership means website managers can handle their GMB tasks directly from their Wix account.

Tasks such as updating hours, uploading photos, and responding to reviews can now be done directly from the Wix dashboard.

Why is this important? This update might encourage small business owners who weren’t previously using Google My Business to begin making the most of its features.

Create a free Google My Business Profile in your Wix account to boost your online presence through Google Search and Maps.

Create and manage your Business Profile right from the Wix Dashboard.

For agencies, this new update is definitely something to be aware of, but it looks unlikely that the integration will pose any threat to experienced local SEOs.

Most recently, Google’s long-awaited Call History feature (that was in Beta until just this week) has begun showing live data.

You’ll now be able to see a history of who called your business and when. Plus, you’ll have the option to view the individual caller’s history and call them back directly.

We’re not yet seeing this option in our own Google My Business profile, but it looks like this update is gradually rolling out, so keep an eye out for it in your GMB dashboard.

Why is this important? Call tracking can be a great way to measure the success of your local SEO efforts and capture hot leads. This new feature from GMB should make it easier than ever to get an overview of who’s called you, without the need for a specific tool.

What Google My Business news has captured your attention? Will you be taking action based on any of these news stories? Share your thoughts in the comments section to let us know!

Stephanie Newton
Stephanie is responsible for managing BrightLocal’s community outreach and engagement, as well as producing and managing content to help inform and educate the local SEO community.
See all of Stephanie's articles (47)

Update 05/18/21: A Local 10-Pack has now been spotted across desktop search results. It looks to be a test, but we’ll be keeping tabs and reporting should any new information ...

In the world of local SEO, there’s always something new to keep your eye out for that could be a game-changer. This week, that news is that star ratings are ...