Update 05/18/21: A Local 10-Pack has now been spotted across desktop search results. It looks to be a test, but we’ll be keeping tabs and reporting should any new information emerge.

Google’s Local 3-Pack might soon be a Local 2-Pack (on mobile at least).

This week, Joy Hawkins at Local U (via Mariano Rodriguez from LawRank) shared findings of 2-Packs being spotted in local search results on mobile.

Since the news was first shared, more and more people have reported seeing a set of just two results when performing local searches on mobile.

Both Android and iPhone users are being presented with 2-Pack results:

When performing a local search, users are usually presented with three top results. This is referred to as the ‘Local Pack’ or the ‘3-Pack’.

Here’s how that usually looks on mobile: 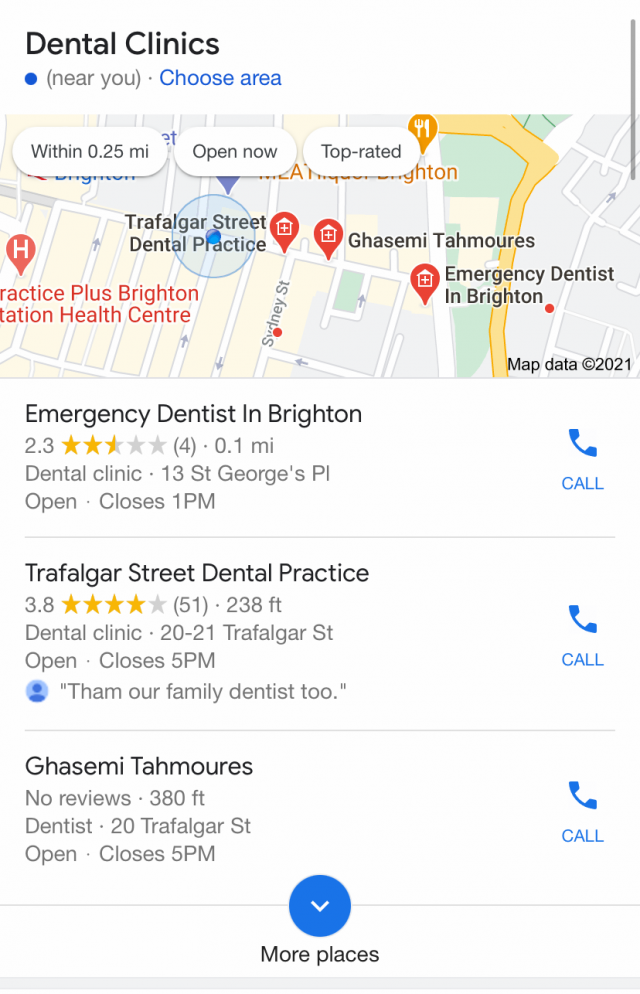 What do we know?

This news, which came as a surprise to many given how long the 3-Pack has been in place, was initially speculated to be just a test. As we know, Google tests things all the time.

That said, Local 2-Packs have been spotted on mobile devices when performing searches in the US, UK, and Canada, so this would be unusually widespread for just a test.

Here’s a search performed from the UK by Claire Carlile:

To see if I could replicate the 2-Pack, I performed a few local searches using an iPhone in Brighton, UK. I tested several queries, and many returned the typical 3-Pack as expected. Three queries, however, returned Local 2-Packs: 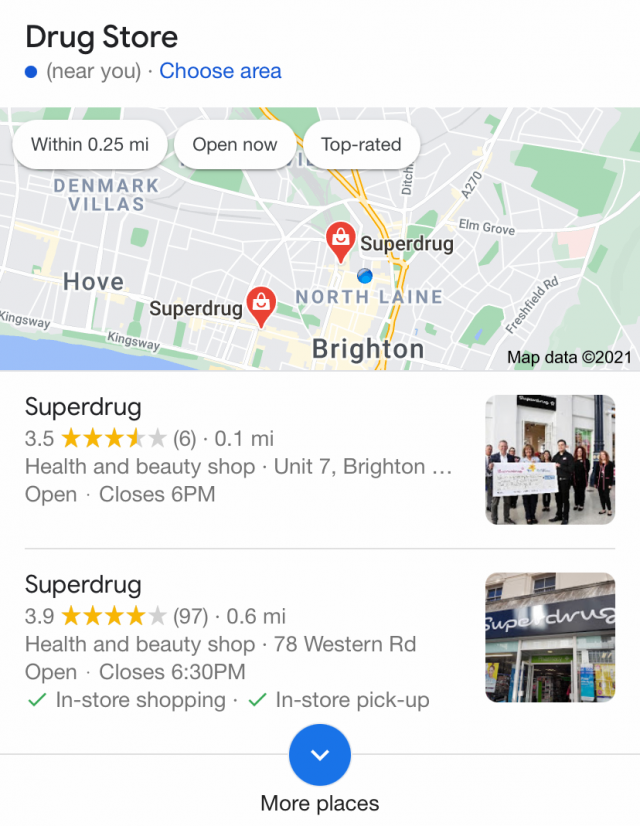 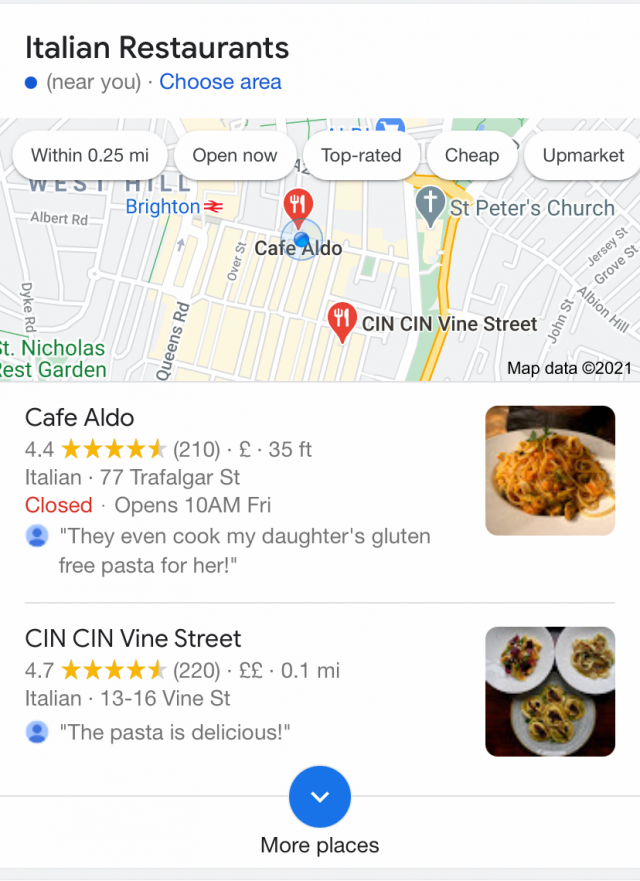 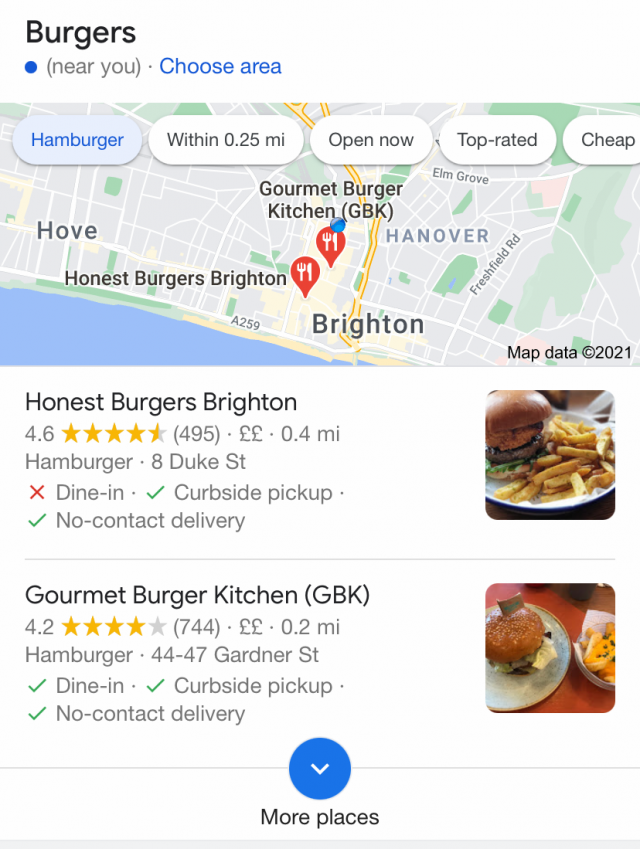 The inconsistency of the 2-Pack could support the idea that this is just a test. Alternatively, it could be that Google is rolling this out across different industries to begin with (interestingly, though, a search for “pizza” returned a normal 3-Pack).

Something we know for sure is that this update (test or not) is only happening on mobile searches right now. So far, nobody has reported being able to replicate the 2-Pack on desktop.

Again, to check this, I performed the two searches which resulted in 2-Packs on mobile, this time on desktop, and was presented with the usual 3-Pack.

This one is for “Drug store”: 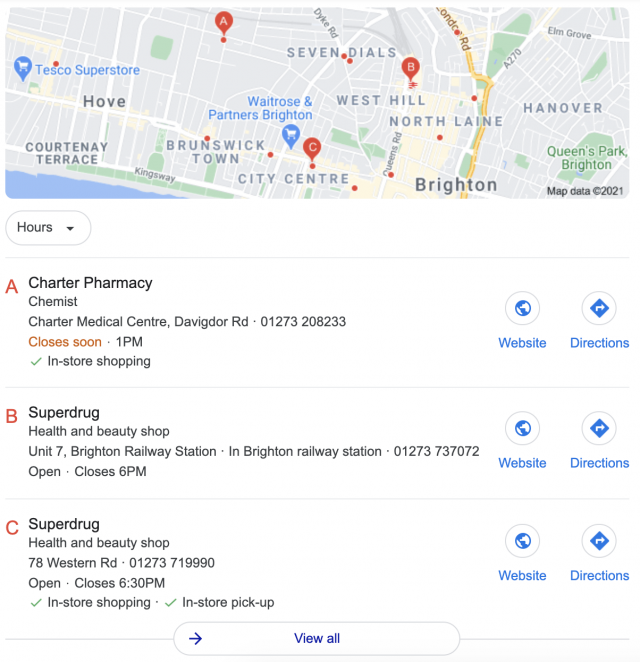 What do local SEOs think?

So far, the reaction has been one, mostly, of shock. As Whitespark’s Darren Shaw said, “It has been proven that 3 is the magic number for choices.”

I think Google’s goal is to provide the best information to the user, so I don’t think they’ll reduce to a 1-pack. I doubt this 2-pack will stick either. Psychologically, it has been proven that 3 is the magic number for choices.

(It’s worth noting that this comment was made before we saw more reports of the 2-Pack on mobile.)

In local SEO, we’re used to seeing tests and being kept on our toes by Google, but it seems no one anticipated the 3-Pack to be going anywhere — likely because the 3-Pack has been a staple of local SEO for so long, and it’s hard to see an immediate benefit to the consumer of showing two businesses instead of three.

When challenged by the local SEO community about its updates and decisions, Google has often purported to making changes that help the user make better, faster decisions. You’d think, though, that seeing two businesses instead of three would make it more difficult for users to easily compare and contrast businesses and reach a decision.

One theory circulating is that Google is creating more space for ads.

A Twitter user shared a screenshot of a Local 2-Pack with the addition of an ad:

Similar but add an ad pic.twitter.com/H02UY8dpsk

It’s possible that this could be something we see more of, and the Local 2-Pack is providing more search real estate for Google to include extra ad results on mobile searches.

This is something that local SEO expert Attorney Sync’s Gyi Tsakalakis has also voiced:

In recent years, there have been plenty of predictions about Google moving to more paid models, and we’ve seen paid-for options like Local Services Ads be invested in more and more. So the decision to create space for more ads wouldn’t come as a huge surprise.

What should you do?

Right now, this news is very early doors and it’s not clear if it’s a test or being rolled out fully. Recently, we’ve seen Google be much more communicative about any updates it’s made (we had a full year to prepare for the Page Experience Update!)

Given that we don’t know if this will be a permanent change, we wouldn’t suggest making any reactive movements.

That said, this change could mean that getting into the Local Pack is going to be even more competitive (on mobile at least) so it’s important to keep up your local SEO strategy and work.

If you’re interested to know if the change might affect your business, we’d suggest performing your own tests and seeing if the Local 2-Pack is present for searches within your vertical.

Finally, as always, we recommend that you keep an eye on your local search rankings. If you have dropped out of the top three spots on mobile, this could lead to a dip in traffic, phone calls, or footfall. You can do this with either a Local Rank Tracker or a geolocation rank tracker.

You can also sign up for daily, weekly, or urgent Local RankFlux alerts to be kept in the know if there are many shifts happening in the Local Pack that might affect your rankings.

We’ll keep you posted as this news story progresses, so keep an eye on this post. In the meantime, what do you think of a potential Local 2-Pack? Let us know in the comments below.

Stephanie Newton
Stephanie is responsible for managing BrightLocal’s community outreach and engagement, as well as producing and managing content to help inform and educate the local SEO community.
See all of Stephanie's articles (47)