No matter which American state you reside in, you’re likely to hear any one of these greetings as part of the 300+ other languages spoken by US residents.

While English is the official language of the United States, its rich diversity means that large portions of the population speak non-English languages.

In fact, in the US, 60 million people—almost a quarter of the US population—speak a language other than English. And if they’re speaking it, you can be sure they’re searching with it, too!

This makes multilingual audiences a valuable new market for any local business looking to: 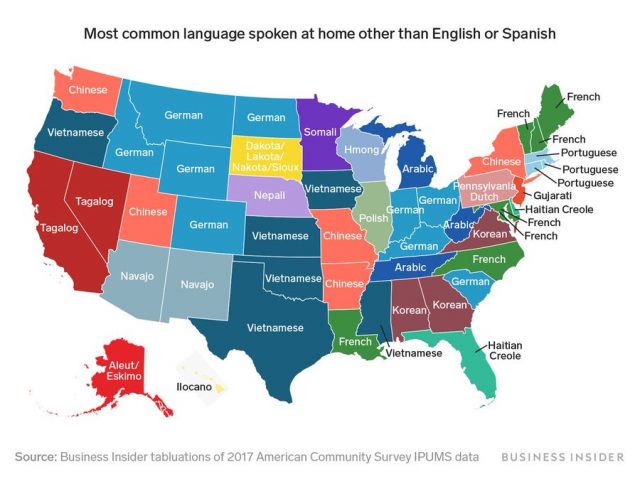 Whatever your city and business niche, your potential customers are statistically likely to speak a language other than English when searching for products and services close to their location.

Google’s multilingual voice search capabilities have echoed this audience need. In 2012, its voice search function supported 42 languages. By 2017, that figure had increased to 119 languages, covering more than a billion people.

If your local SEO doesn’t account for multilingual voice searches, you’re missing out on a huge chunk of potential custom.

In every major US city, a large proportion of non-English speakers live, work, and shop. Each person naturally has the same need for products and services in the local area as native English speakers do.

Let’s take a look at some real-life examples, or you can use this interactive tool to see a map of languages spoken in the United States for yourself.

In Chicago, IL, there are 950,720 people who speak a language other than English. Almost a quarter of the city’s population (23.4%) speak Spanish as a first language.

In the same city, there are 93 plumbers listed on Google as serving the Chicago area.

Now, imagine if you were one of the only plumbers who optimized your digital storefront to cater for those Spanish speakers. How much of a difference could that make to your business?

There’s much less competition for the Spanish market, despite there being nearly the same volume of Spanish speakers as English speakers!

San Jose, CA, is home to the largest Vietnamese population in the USA, with an estimated 70,000 speakers.

As a local business, you exist to serve the needs of the local people. If you’re one of the city’s nearly 300 hardware stores appearing in Google local search, how much could you benefit from optimizing your digital presence to be visible to Vietnamese speakers?

This multilingual trend appears across the length and breadth of the USA.

For example, in Fox River, AK, 87.3% of the population speak Russian and in Grand Isle, ME, 76.7% of residents speak French at home.

BrightLocal Academy’s How to Perform Local SEO Audits for Multi-location Businesses course will show you how to create an actionable audit for a multi-location business – whether that’s for two or 200 locations!

What about where I live?

To find out the popularity of non-English languages in your state, county (and even township!), you can use this tool to conduct your own local language research.

You can then make an informed decision on the potential positive impact of targeting local non-English text and voice searches.

How to Optimize for Local Languages

1. Conduct Keyword Research in Other Languages

One of the trickier aspects of multilingual SEO is keyword research—you can’t always translate directly from English into another language to create your seed keyword list.

It’s worth calling on a native speaker to help with this phase of your research. This is because they’ll be better placed to understand what terms speakers are actually using.

And while it goes without saying, we’re going to say it… never rely solely on Google Translate!

2. Create Personas for Speakers of Other Languages

Language is very much a reflection of culture and heritage and, just as search habits will differ for speakers of other languages, so too will their likes, dislikes, and expectations.

Undertake primary research into your new audience, and create personas that provide you with a deeper understanding of what makes that portion of your demographic tick.

3. Do What You’d Do for a New, English-language Audience

Apply the same SEO principles to developing local language content to house your new keywords as you would for any new English-language audience.

If you were launching a new product or service, you’d want to know how to appeal to your target audience, so do the same things here.

To succeed, you’ll want to:

You don’t need to create a completely multilingual website with every single page translated, but you will need to create content designed to appeal directly to each audience.

Here’s what we’ve covered in this article:

Engage with your multilingual audiences and you’ll do a better job of meeting their expectations. This will make them more likely to engage with (and therefore buy from) your business over a competitor’s.

Mark Crowe
Mark Crowe was Content SEO Executive at BrightLocal. With an interest in all things search, his past lives included work both in-house and agency-side for companies around the world, such as American Express, Microsoft, Yahoo! and Vodafone.
See all of Mark's articles (6)

Managing Google Business Profiles (formerly known as Google My Business) for a company with multiple locations can feel much more complicated than managing single-location listings. Fortunately, Google continues to add ...

When we talk about local SEO, “traffic + prospect/lead/customer experience + conversions” make up the trifecta of what it takes to run a successful local website. These three items feed ...

Are you running a local business struggling to get visibility and sales in your area? If the answer is yes, then one of the best things you can do for ...