With over 31 million app users and millions more web visitors, Yelp is a platform with a high level of visibility. A poor experience amplified on Yelp can have immediate fallout and impact your bottom line.

Yelp’s own research suggests that 90% of Yelp users make a purchase within seven days of visiting the platform, so you’ll need to act quickly to protect your business.

Why a Business May Need to Remove a Bad Review

Whether a review is a fair assessment of a customer’s experience or not, any poor review is potentially problematic because peer feedback is so intrinsic to the modern decision-making process.

Today’s consumers use reviews to:

Removing fake or malicious reviews can therefore have a very tangible real-world impact. This is because fake reviews with low star ratings can bring the overall average star rating down if left untreated.

Can Yelp reviews be faked?

The Harvard Business Review says there’s a “large and thriving market” for fake reviews. Given that reviews not only influence consumers and sales figures but also search engine rankings, it’s no surprise that they’re big business.

However, it’s not quite as straightforward as you may think to have fake reviews removed.

How does Yelp handle fake reviews?

Yelp says that it’s a “community-driven site” and doesn’t take the removal of third-party content — such as images or reviews — lightly. It also says it won’t take sides in factual disputes.

That said, it has invested in a number of programs to weed out compensated and fake reviews, in line with recent UK and US legislation:

Profiles suspected of benefiting from fake or paid reviews may have a Consumer Alerts pop-up applied. The pop-up warns users that abnormal activity — which may be an attempt to mislead them — has been detected on the profile in question after a review of available evidence.

Alerts may tell consumers that there’s evidence of suspicious review activity or evidence of compensated reviews. 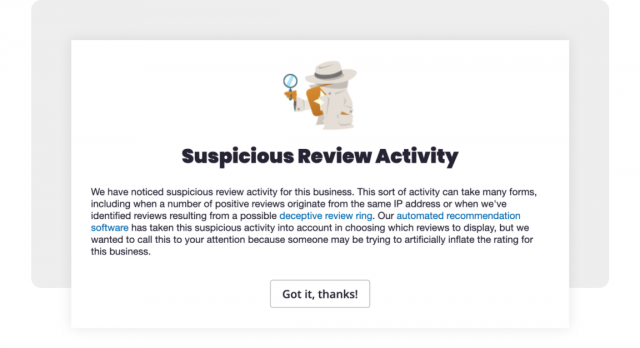 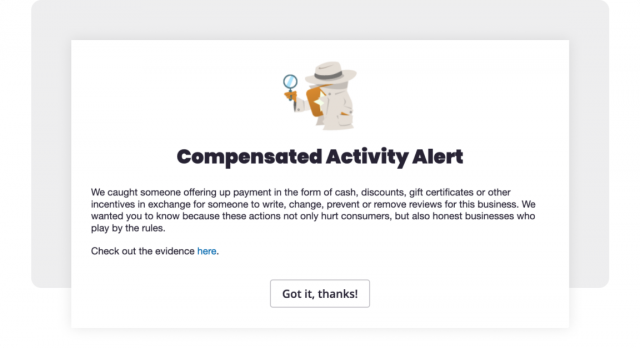 Yelp’s Recommendation Software evaluates each review left for a business profile. It analyzes billions of data points to identify the most helpful reviews and then recommends those to users. This means fake reviews could lack visibility. 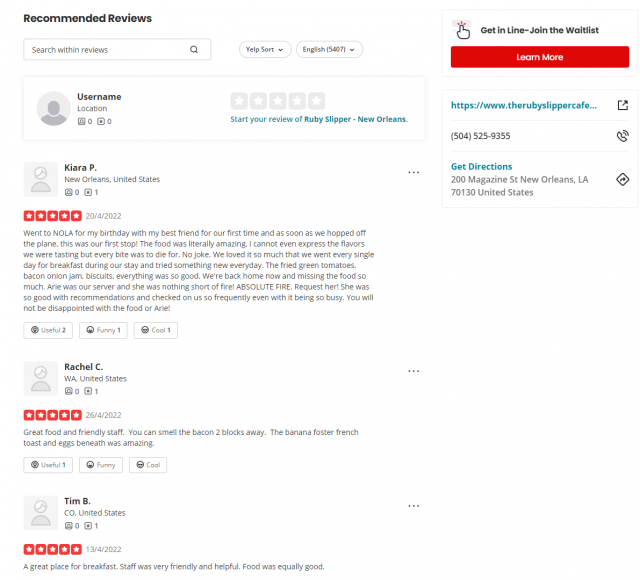 Yelp also has a team of human moderators who review potential issues flagged up by business owners, community users, or its own automated systems. Yelp says it also monitors other platforms and the dark web for shady review behavior. Yelp submitted around 1000 reports to other sites in 2021, warning of suspicious groups, posts, and individuals uncovered on those other platforms.

How do I remove a fake Yelp review?

Getting Yelp reviews removed is not a cut-and-dried process. A good strategy is to approach the review as genuine, while also looking for any evidence that it’s fake or malicious.

The temptation will be to rush in quickly with a strongly-worded reply. Resist that temptation!

Poorly-worded review responses can quickly create a negative impression of your business and put other customers off. In the worst-case scenario, they could also go viral, creating exactly the kind of publicity you don’t want for your business.

You’ll need to keep a cool head and show that you’ve tried addressing the bad review in a constructive and professional way.

For a genuinely negative experience, you should impress the reviewer with your commitment to putting things right, allowing you to ask them to update (or even delete) the original review to give a more balanced opinion.

We’ve put together an article on dealing with negative reviews like a pro.

If the above fact-finding mission fails, then take comfort in knowing you’re now in a stronger position to report the review to Yelp as being false, defamatory, or malicious in nature.

Yelp has clear guidelines governing reviews left on the site. It specifies that reviews:

Start with ‘Should be factually correct’. Collate as much information from your business records as you can, including your documented attempts to address their concerns as genuine.

See if you can prove that the review has a clear conflict of interest, such as a review left by a disgruntled former employee or a competitor.

Highlight any examples of inappropriate material, such as threats, hate speech, or harassment — either in the original review or in subsequent communications.

As noted above, fake reviews are big business in some corners of the internet, and they’re a pain to investigate if there’s no genuine information to cross-reference within your business.

Instead, make a strong case for removal by gathering evidence to present to Yelp:

How to Submit a Fake Reviews Report to Yelp

With your evidence gathered, you can now go ahead and submit a request for the offending review to be reviewed by the Yelp moderators.

If you’ve not done so already, then the first step in removing Yelp reviews is to claim your business profile.

This is easy to do — go to Yelp For Business and follow the steps outlined. This Yelp blog post also provides more detailed instructions if you need help with this essential step. 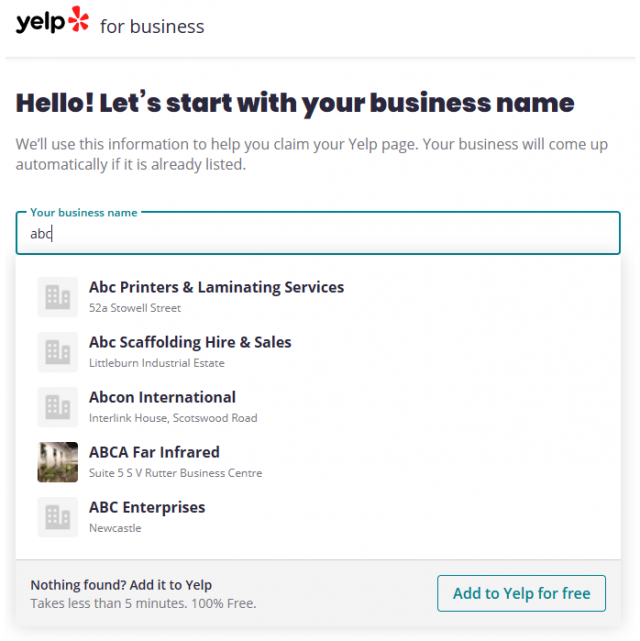 Log into your Yelp business account. From your dashboard, navigate to ‘Reviews’ and then scroll down to find the review you’re asking Yelp to remove. 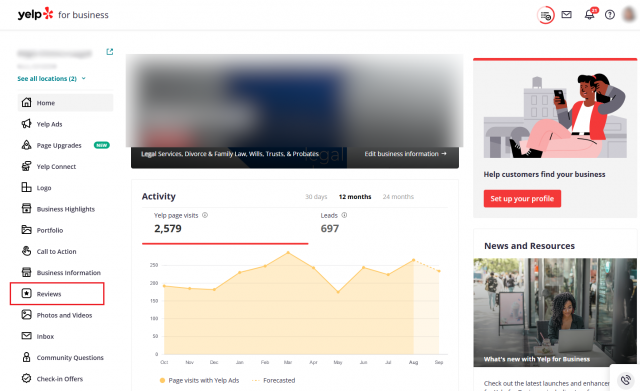 You’ll see three dots to the side of the review text. Click on those dots to pull up a menu and select ‘Report Review’. 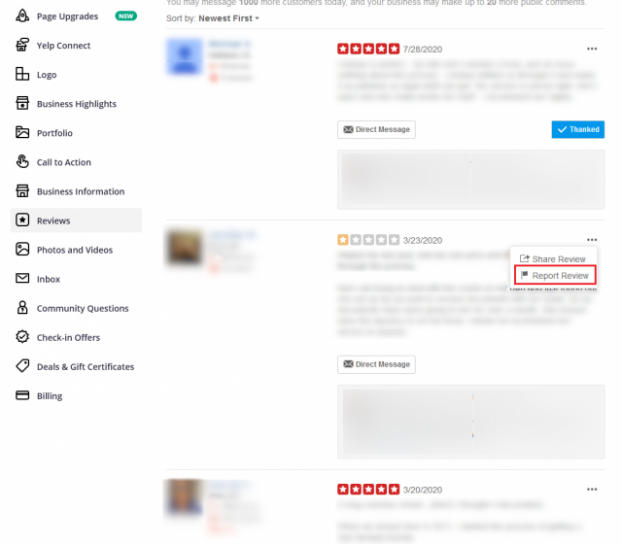 Select the most appropriate reason for requesting the Yelp review removal and complete the form with as much information as possible. It will then be reviewed by the moderators. 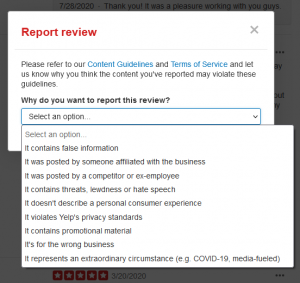 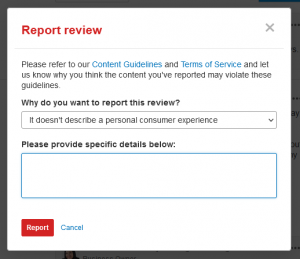 Now comes the hard part…the wait! Yelp will inform you of the outcome of the investigation. In the event that the Yelp review is removed, the original author will also be notified.

This process can take several days, but either way, you should be notified of the result. If you don’t hear anything, then contact Yelp directly with your case number to try and secure an update.

What if the Yelp review isn’t removed?

Yelp may not uphold your complaint. If that’s the case, the negative review will remain on your profile.

While this is frustrating, your best course of action is to learn what you can from the feedback so that future reviews might be more positive.

Our complete guide to online review management includes advice on building positive reviews is packed with tips, strategies, and templates to help you do just that.

Jason Brown
Jason Brown is SEO Manager at Over the Top Marketing and a Top Contributor on the Google My Business forum. He spends his free time battling fake online business reviews. He can be found on Twitter @keyserholiday.
See all of Jason's articles (3) Follow Jason on Twitter